The point to point stages route of the Atlantic Pyrenees

BASOAK is the road bike ride par excellence of the Basque Pyrenees and the North of Spain. A tour with everything thought and organized for the cyclist. A track that combines in a single trip the kilometers of the classic cycling Tours of Navarra and Gipuzkoa with the modern and hard Mountain passes of the Pyrenees of the North of Navarre and the French Basque Country.

"Wall of Gaintza" in BASOAK PLUS, 1,6 km to 15,3%-Ordiziako Klasika 2015-
The pelotón of La Vuelta a España 2016 visiting BASOAK. White Froome, green Valverde and red Quintana.
Everyday scenes in BASOAK
High mountain pastures in Irati -Irati Extrem 2013-
Ridge between Ahüski and Bagargi one of the finest cyclists sections of the Pyrenees
Autumn in BASOAK 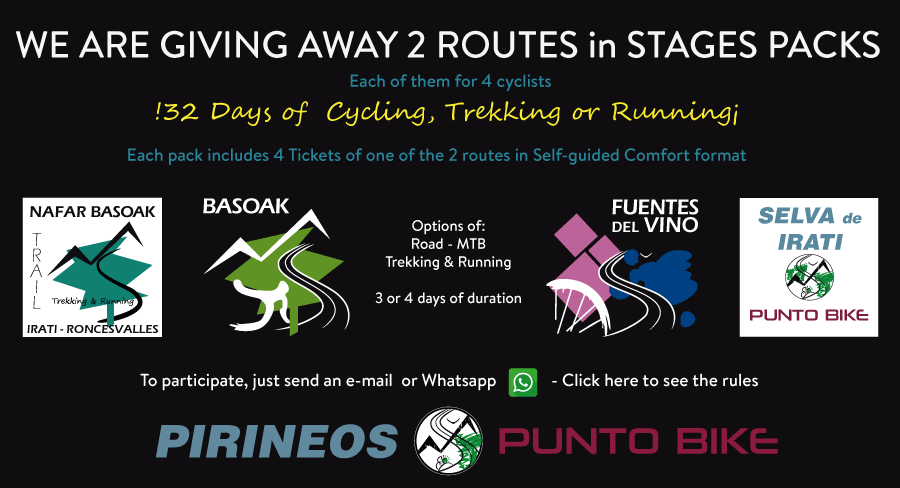 BASOAK is a circular route with 7 to 3 day options

On this page you will find all you need to organize the journey: GPS tracks, maps, guide rail, roadmaps and links to all services you may need if you want to do it on your own.

You can also see the different options available if you prefer to hire a pack with everything organized. From the basic self-guided tour packages with luggage and companion shuttles to Guided Tour packages with both a support vehicle and guides on route.

The geographical space which we will cover travelling BASOAK includes all the North of Navarre, the South of Gipuzkoa and the Basque / French Country.
The 12.180 meters of unevenness of the option BASOAK PYRENEES -18.060 in the PLUS option- includes the classic ports of the Navarre cycling rounds, Urbasa, Uitzi, Etxauri... the "walls" of the Basque classics tours, Gaintza, Aztiria, La Antigua... and the new, hard and "modern" ports - some already discovered for professional cycling - of the Basque Pyrenees; Inharpu / Ahuski, Munhoa, Arnostegi, along with others already more settled such as Issarbe, Bagargi, Larrau and La Pierre de San Martín. 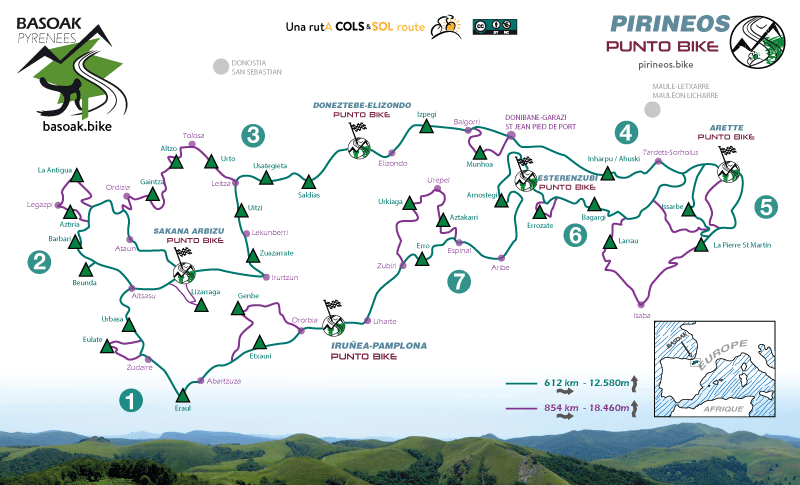 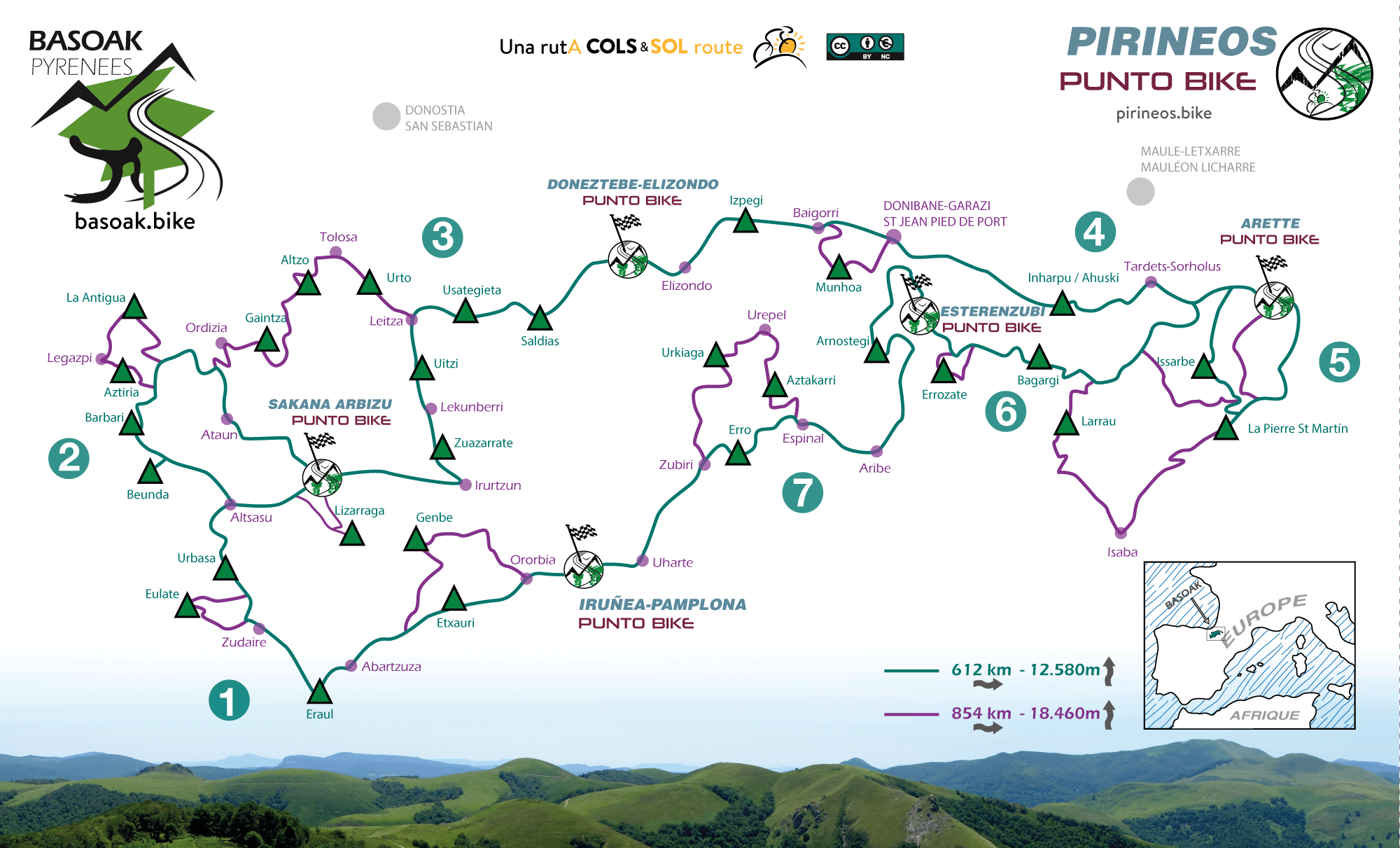 The philosophy of the route is to make "sport bicycle touring" but trying that at the end of the day there is still enough energy for something else besides resting until dinner. This is done to allow us at the end to have enough time to be able to learn - even slightly - where we are. Be it by getting into a pool, strolling through a forest, wandering through a village, or reading a book.

Anyway, if what you need are kilometers and hours on bike, all the proposals have their Option PLUS 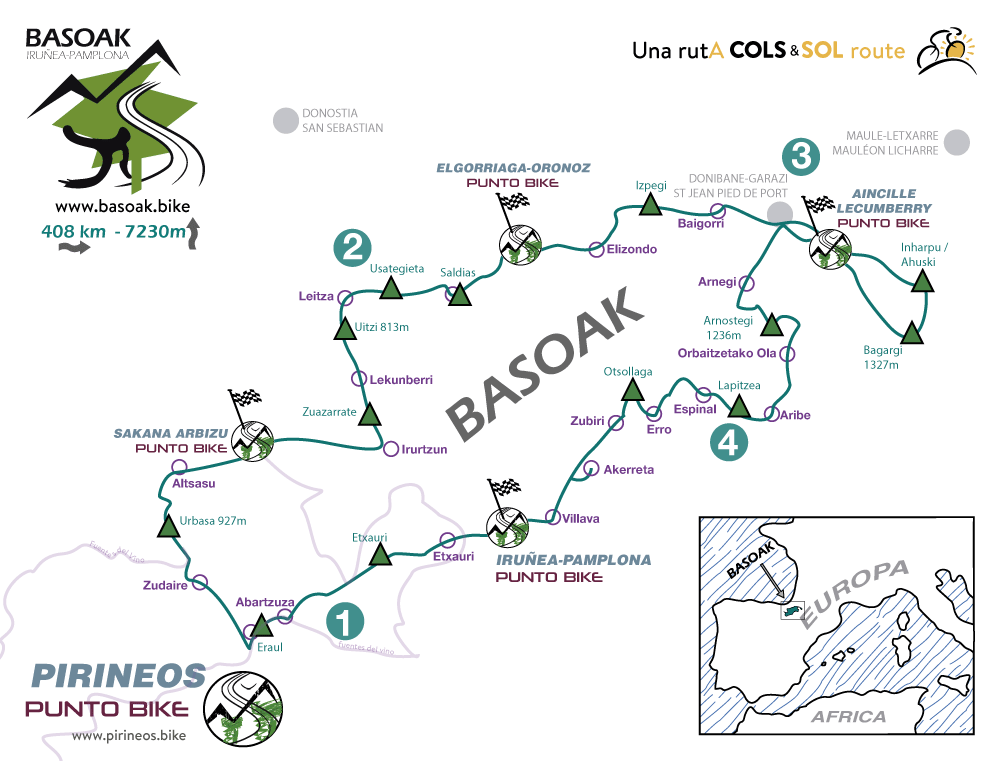 BASOAK IRUÑEA PAMPLONA 4 days
The standard version of BASOAK with point of start/end in Pamplona or Arbizu. 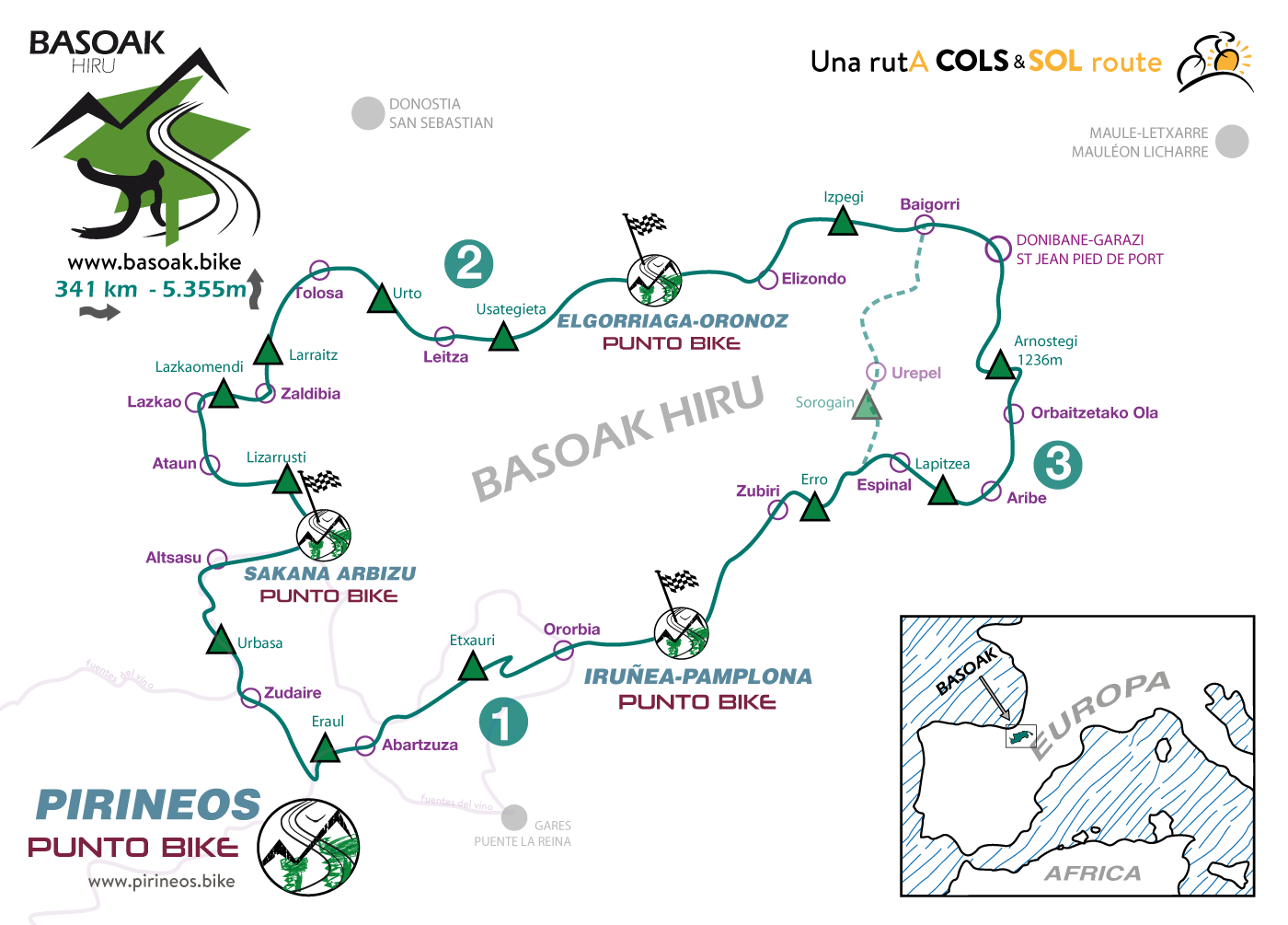 BASOAK HIRU 3 days A route in the same geographic space but modifying the section by the Irati forest to reduce the path to 3 days. The second stage track is modified with respect to the choice of 4 days and the route enters Gipuzkoa trough the Sierra de Aralar.

BASOAK Aralar-Irati, another of the options available.
Starting the route in Arbizu - Sakana Valley - and without scale in Pamplona. 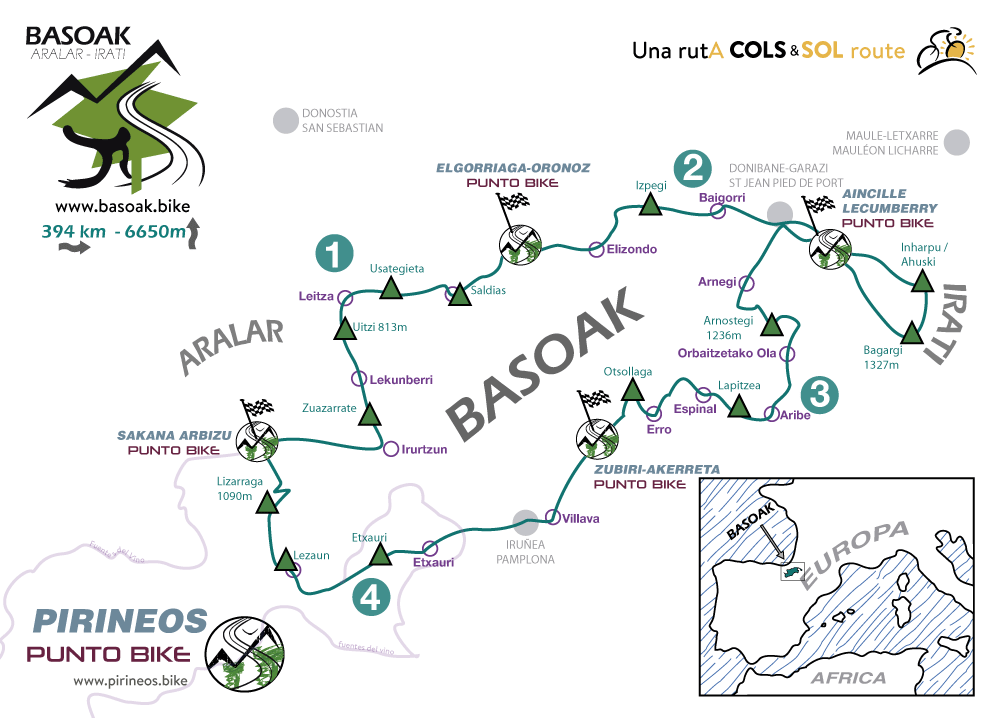 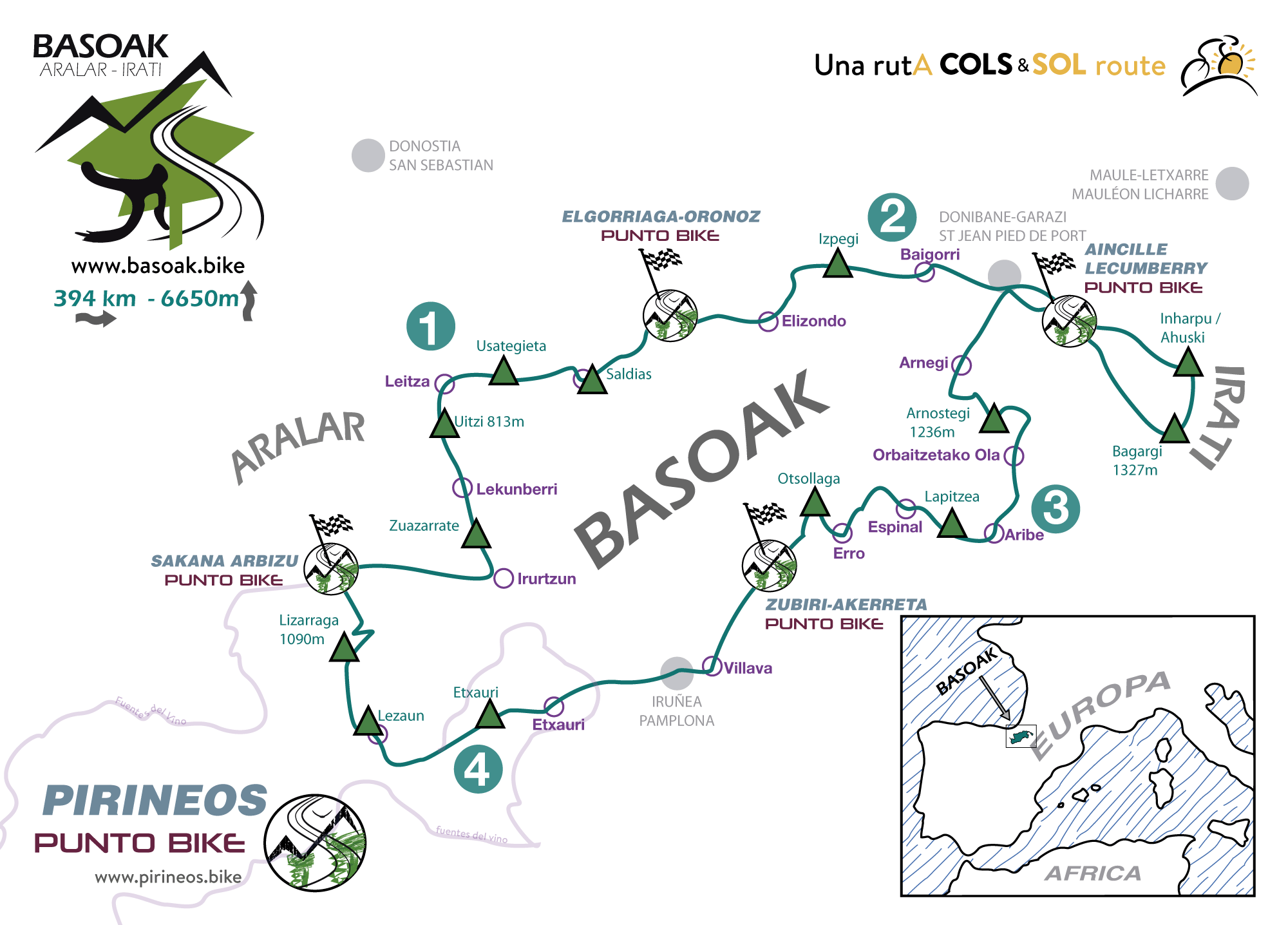 Multimedia and/or description of the route

We are going to pedal toward the Basque Pyrenees. From the Lizarrusti forest, in the Aralar Range, in the heart of the Basque country, to the Irati forest, one of the main forestall masses of Europe and already fully installed on the Pyrenean chain. That is why BASOAK, forest in the language that has been spoken in the area for hundreds of years. That is why, the forest is what we will have as a common denominator for almost the entire route.

Rising Zuazarrate from the Valley of Sakana

After cycling the Sakana valley (Navarre), a timid incursion takes place in the Sierra de Aralar in passing Zuazarrate.
From Lekumberri on, ports on Leitza, Uitzi and Usategieta, 4 stars cycling (the one of 5 for tomorrow) and we enter the Baztan. Modern biking on the ramps to Saldías and quiet end cycling along the hillside of valley to Santesteban and Oronoz. 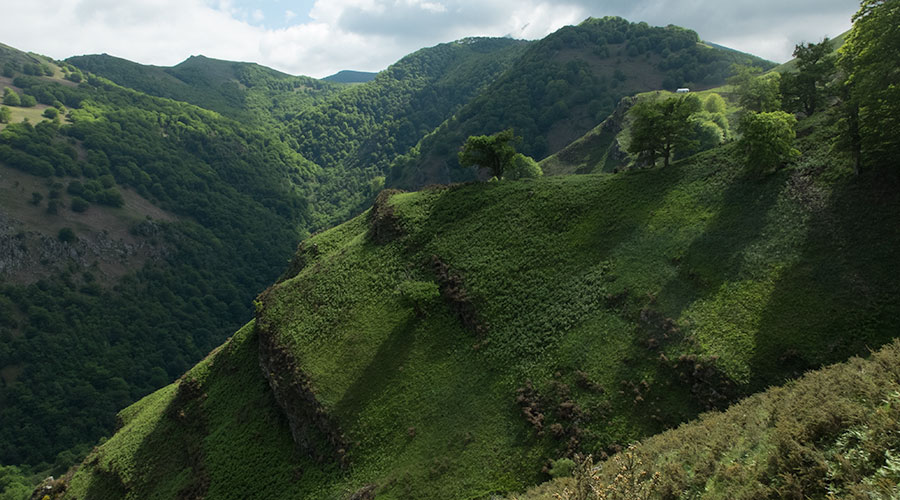 Second day, spectacular scenery down the port of Izpegi towards Baigorri

The Baztán towns works as a bridge with the Pyrenean chain. Once crowned the top of Izpegi, the view opens to the north and shows the territory left to come, to pedal.

Views from the COL de Izpegi towards the Pyrenees

Down the "lowlands" from low Navarre, and beyond and "above" the real 5 stars territory of the Basque Pyrenees: Akuski, Irati; Arnostegi... Of course, with real slopes and percentages that require a longer sprocket ... as they say ... Come and tell it ... almost speechless ... a show with us as protagonists. 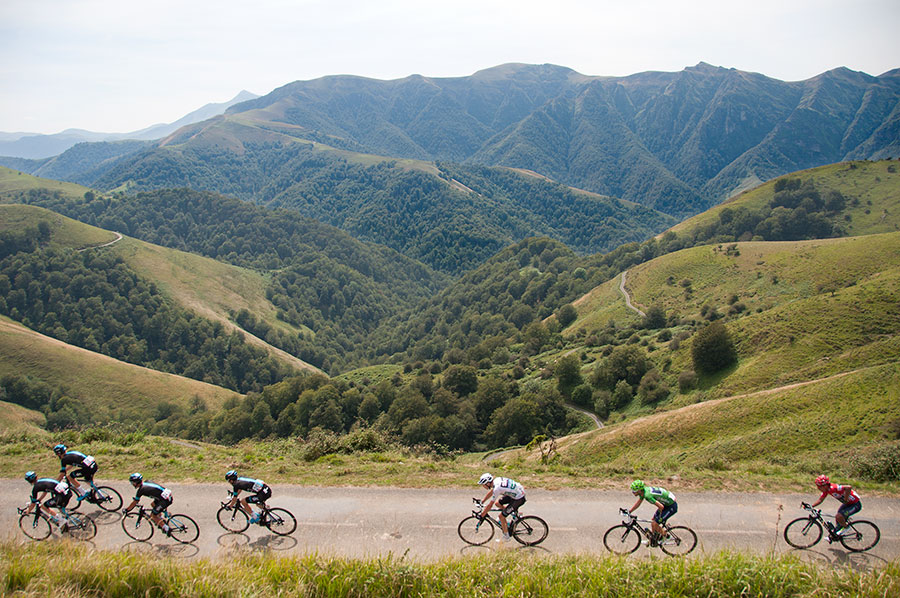 Orgambide COL on the descent of Arnostegi, we are going toward Navarra

Back to reality, you go up and down the southern slopes of the chain across the Pyrenees Navarre from the remains of the old weapons factory of Orbaitzeta up to Zubiri. Already before arriving we were parallel to the pilgrims of the way of Santiago. 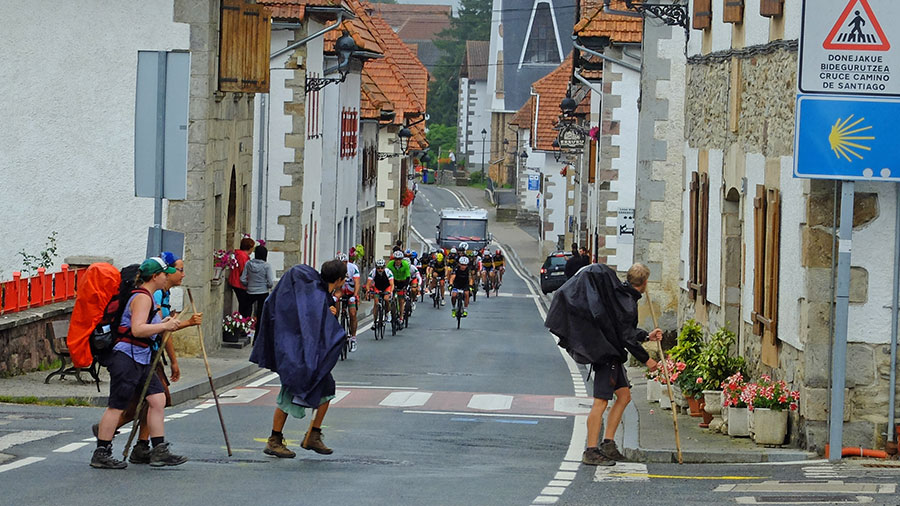 We will continue in this pattern, BASOAK will down its intensity, and while we cross Villava, like in the Tour of 96, we will turn and pass in front of the house of the five-time Tour winner Miguel Indurain. Once in the old Iruña, if we want we can ride along the route of the San Fermín festival recalling the time trial team in the prologue of the Tour of Spain 2013. 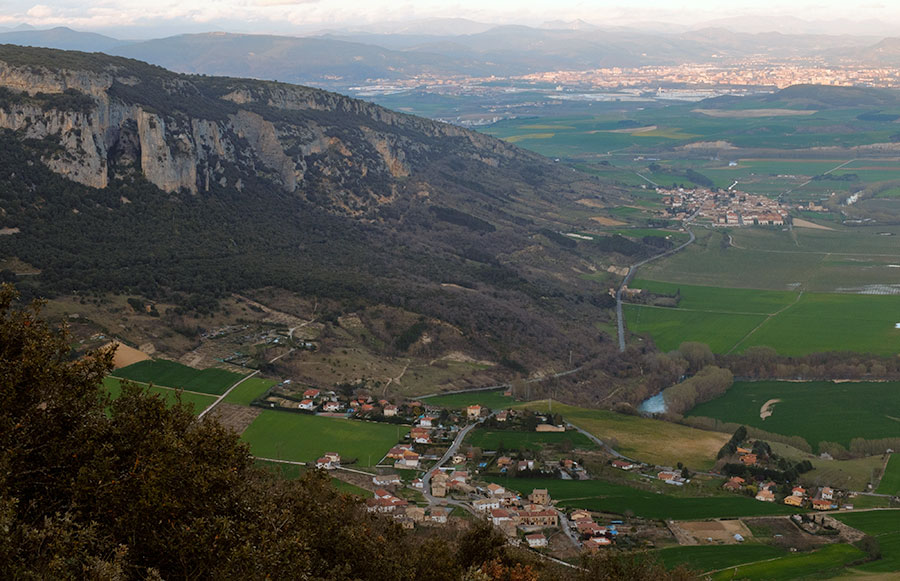 Typical Navarre villages on the slopes of Etxauri port, in the background left Pamplona

Separating pilgrims and tourists spots, and passing from farmland to forests of oak, we get over to the ports of Etxauri and the Sierra de Andía, and after crossing the tunnel in the port of Lizarraga, we return to breathe BASOAK and... Sakana... and Aralar... and THE END.

This has been and this can be.

All the proposals presented on this website are sold through Pirineos PUNTO BIKE CIF 15954000-G
Inscribed in the Tourist Registry of Navarra with Code CI.NA-128

The MTT Route of the BASQUE PYRENEES forests 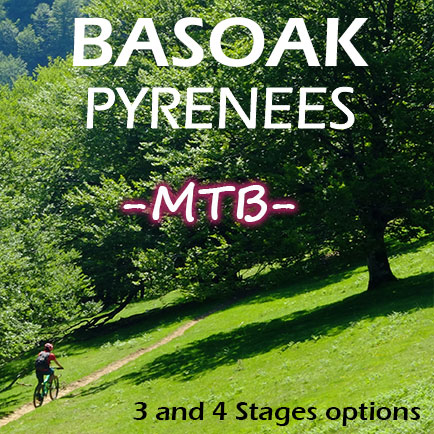 If BASOAK have interested you, it may also interest you 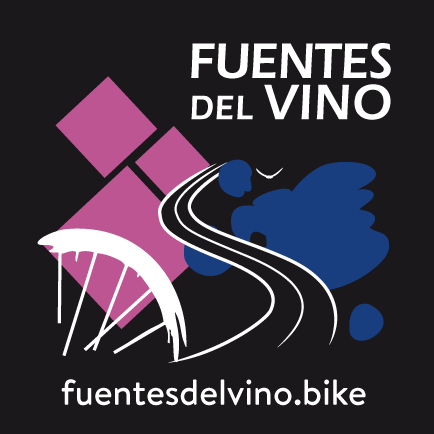